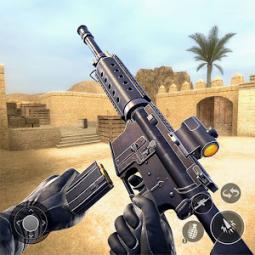 Keep the track of your health during combat with terrorists, use health kit to stay alive. Reload your gun before engaging in a battle and achieve victory in time attack mode to take over the enemies of action games. Enjoy one of the best free offline fps shooting games with unlimited battle royale fun. In this FPS shooting game explore the best multiplayer games mode for real shooting arena fun. This will be your favorite Offline action games if you like battlefield gun games. We offer one of the best 3d gun shooting games that is smaller in size but more exhilarating action game. This will entertain you with the best gaming arena experience and adrenaline rush experience.

The gameplay of multiplayer shooting games is very action-packed & thrilling. Looking for the most addictive clash squad popular games? Start your daily mission attacking enemies in this best offline shooting game to increase your player level power in a new beginning. Counter terrorist games or fps shooting games is all about clearing missions solo, multi op or with the team deathmatch. Diversity in high quality environments. A variety of tactical maps are given that will never let you feel playing typical shooting missions of fps war games. Get ready & challenge yourself with the critical strike by shooting enemy squad in terrorist shooting games.

You have a variety of modern war weapons in this battleground shooting game, just start your battle for free on this mobile game. Come and battle with the terrorist in endless survival shooter mode. Modern Fps shooting 2021 has unique features of fps offline commando secret mission in combat battlefield strike. You get stronger through the modern weapon strike in this real free fps firing game goes on. In game collect bounty of higher level gun to takedown terrorist in fps commando shooting action game online.