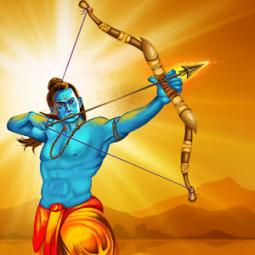 Burn the evil Ravan, Kumbhakaran and Meghanad with the power of Lord Ram's mighty and magical archery skills!


As per the Ramayan - The major sanskrit epic of ancient India, Ram was seventh avatar of god Vishnu. He was the eldest and favourite son of Dasharatha, the king of Ayodhya and his Chief Queen, Kausalya. He was a epitome of virtue. Dasharatha is forced by Kaikeyi to command Ram to relinquish his right to the throne for fourteen years and go into exile. Ram's wife Sita was abducted by Ravan, the evil king of Lanka during his exile. He and his brother Laxmana raised a monkey army with the help of the bahubali Hanuman and fought an epic battle with Ravan and his army to free her wife.

How to play?
- Aim and shoot the arrow to defeat the evil Meghanad, Kumbhakaran and Ravan.

Game is free to download and play but some of the game items can also be purchased with real money within the game.