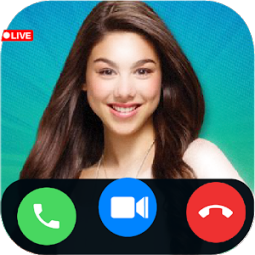 ♦♦This Application is Call to Phoebe Thunderman fake call on your phone. Today you can prank your friends and joke with them, Connect to Chad Wild Clay fake chat by clicking on the fake chat button and have fun with your friends.


♦♦Fake call the Phoebe Thunderman is a free app that you can call📞 the phoebe Thunderman's if you played the original game, you already know that there is an phoebe-thunderman american will try to kill you and your other friends players online,

♦♦in this app you have the chance to call this Phoebe Thunderman girl , like video call, chat with the phoebe american gril, call 📞 and many other features.

♦This is not the original game, its just a fan made app, but it's highly recommended to give it a try, if you love the phoebe Thunderman's game and if you happen to be a fan of the game.

♦Run the application normally.
♦set the call .
♦phoebe Thunderman-girl voices will be played when you answer the call .
♦a video of phoebe-Thunderman in her house will be played when you answer the call .
♦Realistic feeling of talking with rod thanks to the interface.
♦live chat and live video calls.
♦chat with The phoebe Thunderman Grils by answering properly her question.
♦no Crashes
♦Nice Graphics
♦Possibility for you or your friends to accept or reject the call.
♦Cool and friendly Design.
♦have a texting conversation with phoebe-thunderman Simulation
♦Answer the fake incoming call from the phoebe Thunderman's
♦The phoebe thunderman's Sounds Just For Fun
♦Have a blast!

You can't made a video call or chat, but what inside the app seems like you will made a call with phoebe Thunderman's game !!! We hope you like it :) Disclaimer : You can't make a real call, this is just a prank App!

T This is not a real calling and only a joke! The app does not bear any harm and is only for entertainment!
Note : This app directed by "Fans" And it's not Official. If we infringe copyright, let us know and it will be removed immediately .
Thanks