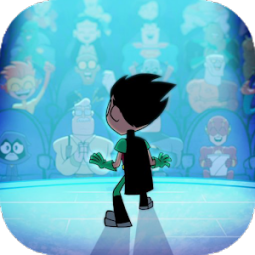 Battle Titans Escape – Go Teens Mission real fun and addicting casual game for anyone and any age, this game is very simple yet challenging, there's dozen of level you can play, with super cute music will make you not boring, beat the level and boss you will unlock new world

How to play the game alien shooter fighting vs monsters and aliens
Use the Left and Right buttons to move your superhero from one side to another, and the Up arrow buttons to jump over obstacles.