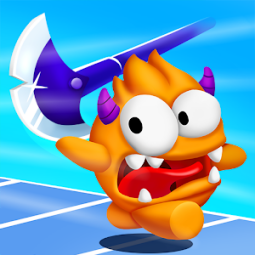 Giant Blob Runner 3D is the best fun run 3D game for those who love simple entertainment. Giant Blob Runner 3D will be your favorite run race 3D of all time! Collect and upgrade your colorful blob crowd, dodge all obstacles and reach the main area to win boss in the final battle.

Start the fun run race 3d with an orange blob and collect another blob runner to create a Giant Blob runner 3D crowd! Lead your crowd of blobs to dodge different types of dangerous obstacles on the fun run race 3d. Be careful to preserve the number of blobs crowd because the more blob you gather, the stronger you get to fight with Giant Boss. Blobs are easy to break when lightly touching obstacles, so dodge the obstacles in a perfect way. Get bigger, stronger, and super blob to collect special rewards. Try to save as many teammates as possible.

Avoid moving axes and complete other challenges! Run through monstrous chains and dangerous areas to the finish line! Defeat the Giant Boss at the end of every level and win the run race 3D. Be careful! This Boss hits very hard and his punches are heavy.

🏃HOW TO PLAY Giant Blob Runner 3D:
- Use only 1 finger and move left or right to dodge the traps
- Gather Blob crowd on the fun run race 3D. Gather blobs as many as possible
to get the most powerful strength.
- Guide the crowd of blobs and run together to finish at the end of the level!
- Avoid touching on the traps on the fun run race 3D to preserve your teammates
- Join clash 3D with Giant Boss at the end of the level, Tap continuously to punch the giant Boss and win the run race 3D.

⏬ Install and enjoy Giant Blob Runner to kill time. Please rate ⭐️⭐️⭐️⭐️⭐️ to support us.
Become the master runner today and enjoy the most relaxing moments. Thank you!