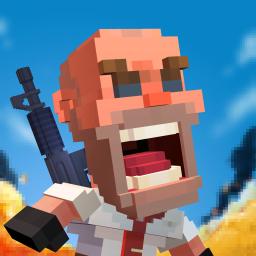 Start with nothing. Find gear and weapons. Outwit. Outplay. Be the lone survivor of the Battle Royale!

BATTLE online opponents in the new open arena game Guns Royale! Both PvP and PvE gameplay available! Play solo or as part of a team and enjoy hours of fun!

Race to collect the best guns and level-up as quickly as possible to dominate your competition. Take on each opponent and compete for #1! Choose your weapons wisely, battle till you can’t stand and dominate the arena!
What are you waiting for? Grab your gun and get shooting!

Collect All the Guns
• Search the ground for special guns and other weapons!
• Keep collecting to have an advantage over other players.

Guns Royale ain't no game of Go Fish! This game is about guns, guns and bigger guns! Take the battle to the blocky online arena where you’ll search and collect more guns and items! Earn more Experience Points in PVP battles and rise to the top of the block battleground! Grab your gun, find more guns and gear, and get shooting! BATTLE against online players in this survival shooter!