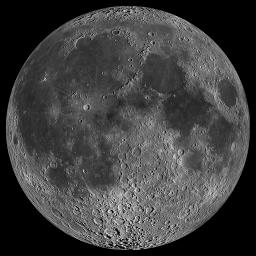 Not just a Moon Map! Rather a series of actual photos of the phases of the Moon with prominent features marked and named. This makes it easy to identify features on the Moon as you are seeing them as they really are, not as an idealized representation on a map. Each Map gives priority to features on the terminator (the line between day and night on the Moon), as the low sun angle makes them stand out more. As craters recede from the terminator they become less prominent and are generally not indicated.

Opening screen shows the current Moon - navigate to other phases by swiping to each side then tap to reveal the detailed map of each phase. Layers can be added or removed depending on your requirements:
* For beginning observers using binoculars, just the names of seas can be revealed in Latin or English.
* For telescope users, the names of craters and other major features can be revealed.
* For advanced telescope users, an extra layer reveals smaller details such as Faults (F), Rilles (R) and Valleys (V).

Overall Features:
* 30 images of the Moon, 18 of the waxing moon, the Full Moon and then 11 of the waning Moon (there are less of these as they generally occur in the morning hours and are less often observed).
* Images can be shown North up or South up depending on telescope settings and location.
* Maps can be shown mirror reversed if required for your telescope orientation.
* Search for major feature names of waxing and waning Moon.