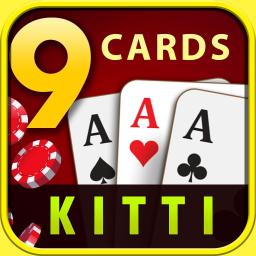 Play Nine Cards Brag - kitti with Players around the world in real-time! Play with Anyone, Anywhere and Anytime!
Download Now and get 1 Lakh Chips Free!
Invite your Friends and Family and play with them on Private Tables. Don’t have the internet? You can always play offline. Play Nine Cards with friends on Hotspot/Wifi.

Introduction
Kitti - Nine Card Brag is a traditional British card game. It is very much popular as Kitti in India and Nepal. In Bangladesh nine card brag is known as 9 card or 9 cards.
Nine Cards is a card game played by 2 to 5 players. Nine Cards or 9 Patti can be played by up to five people. Winning depends on your cards and moves. This is very much like Teen Patti but played in 3 sequences. The player who achieves 2 out of 3 sets wins the game. Kitti is a popular game with multiplayer features in a closed network. It is variations of real teen Patti a popular Indian card game.

Dealing
Nine Cards is a card game played with a standard 52-card deck played by Two to five players. Everyone gives a stake to the pot and nine cards are dealt with each player. Dealer changes each round in a clockwise direction.

Play
Organize your nine cards in 3 best possible sets as highest to lowest value. Hold a card to swap and rearrange. Tap Ready when you are done with card arrangement. The highest-ranking set of cards must be played for the first time. The player with the highest set wins the hand. Players reveal their second and third sets. In the same way, starting with the player who won the previous hand. If you win two consecutive hands, you win the pot. If you win all three hands, you win the pot and a stake amount from all players. Otherwise, the pot carries over into the next round.
If you have no chance of winning the game you can call a “Pack” or “Fold”.

Strategy
In nine card brag, it is up to the players to decide how to organize their sets. On occasions, it is better to arrange the sets so that, instead of having one very strong set and two relatively weak sets, a player dilutes the strength of the first set in order to strengthen the other two sets. (e.g. By breaking up a Trey in order to make up two runs and a flush). After seeing a set or sets played by an opponent, a player may readjust the playing strength of his or her hand, in the manner suggested, if there is little or no chance of winning the round, provided the sets are still played in descending order of strength. Once played a set cannot be changed, the remaining cards can, however, be reorganized at any time.