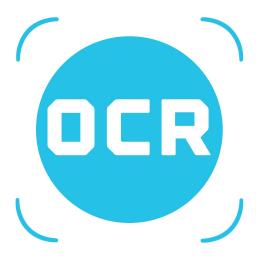 OCR Text Recogniser is app to recognize any text from an image with with a precision rate between 98% to 100%. The app recognizes all latin languages such as English, French, Spanish, Portuguese, German, Italian, Norwegian, Danish, and so on.
It turns your device in to text scanner.

Optical character recognition or optical character reader (OCR) is the electronic or mechanical conversion of images of typed, handwritten or printed text into machine-encoded text, whether from a scanned document, a photo of a document, a scene-photo (for example the text on signs and billboards in a landscape photo) or from subtitle text superimposed on an image (for example: from a television broadcast).