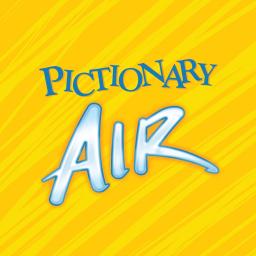 Draw on air, see it on your device and mirror to the TV in this hysterical way to play Pictionary™, the classic family drawing game.

Use the special Pictionary Air™ pen (sold separately) to draw in the air while the app tracks and displays the sketch. Really bring the clues to life by interacting with your sketch, similar to charades, while your team guesses as many clues as they can!

The easy-to-use app will:
Track your scores
Time the game
Set the rounds
Work in portrait or landscape mode
Work with both front-facing and rear-facing cameras on your device

You can also save, edit and share videos of all your funny gameplay moments!

Pictionary Air™ Harry Potter™ adds magical flair to the original air-drawing game! Players choose a Hogwarts™ house and try to guess as many clues as they can to win the house cup. Fill the meter to earn 2x points and add magical effects to make your game even more spellbinding! Find the Golden Snitch for even more points!

Pictionary Air™ Kids vs. Grown-Ups has kids playing against adults in an air-drawing showdown! Kids clues (sold separately) include images, so players 6+ can join in the fun.

Do you have 2 Pictionary Air™ pens? Try “All Play” where both teams can draw in the air and guess AT THE SAME TIME.

Use an Apple TV to mirror the game to your TV for even more laughs!

Pictionary Air™ is the hilarious new addition to your next game night.