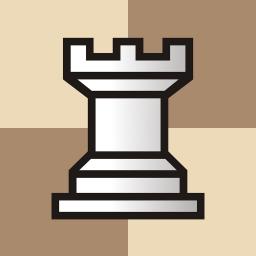 Play chess against your friends in a two player game on the same device or online using Game Center. Test out your chess skills against the computer with configurable difficulty and quick response times.

Chess Deluxe features:
- A simple, easy to use interface
- Play as either white or black
- Play against the computer with configurable Easy, Medium and Hard difficulties for amateur players
- Play online with your friends using Game Center
- Unlimited ability to undo moves
- Redo previously undone moves
- Move highlighting to suggest possible moves
- Game timer with several timing options
- Animated moves
- Board rotation to allow each player to view the board from their point of view
- See pieces that have been captured
- See the list of completed moves in Standard Algebraic Notation
- Select a completed move from the move list to go back to that move
- Dark mode support on iOS 13 or later
- No ads

Chess Deluxe is a universal purchase and includes a macOS version of the app. Buying this app allows you to download the macOS version using the same Apple ID.