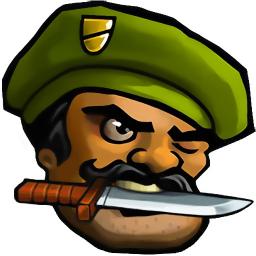 Guerrilla Bob has arrived on your Mac, with incredible 'next-gen' visual effects and lots of great improvements!

Play CO-OP Multiplayer on the same Mac, or connect your device to any other Mac, iPhone, iPod touch or iPad, through the Local Area Network/WiFi.

Guerrilla Bob is a fast-action shooter with high-quality visuals and plenty of weaponry!

“Top 10 most anticipated iPhone games for 2010 – It's everything we've been asking for in a twin-stick shooter: depth, variety, and rewards. Guerrilla Bob finally delivers the three elements of which others in the genre have been so starved.” – PocketGamer

“John Rambo has nothing on Guerrilla Bob.” – GameTrailers

“The art design is phenomenal. I said oh, wow! That's something else.” – TouchArcade

Get your finger on the trigger and prepare to fire! Guerilla Bob is an action-packed shooter game with stunning visuals, plenty of kick-a*s weaponry, unique enemies, explosive ammunition and non-stop humor.

KICK-A*S WEAPONRY
Bob can collect money from the enemies and use it in the shop to unlock a huge variety of weapons, each with their own upgrades:
• Machinegun
• Timed Bombs
• Molotov Cocktail
• Shotgun
• Double Uzis
• Flamethrower
• Rocket Launcher
• Grenade Launcher
• Sticky Bow
• Chaingun

FAST-PACED SHOOTER COMBAT VERSUS DEADLY ENEMIES
Face an army of fearsome foes wielding weapons of every variety. This is a challenge not for the faint of heart!

EPIC BOSS FIGHTS
The gateway to each new level is guarded by imposing boss enemies with uniquely powerful weapons and tactics. You will even have to face John Gore himself!

Alternatively, engage in Classic Survival Mode where endless enemies come at Bob from all directions in a closed arena environment.
In Wave Attack Mode you fight waves of baddies and access the shop to purchase new arsenal.
Extra difficulty modes are for players who think they’re experts!

ORIGINAL SOUNDTRACK AND PROFESSIONAL VOICES
Immerse yourself into this humorous military shooter with an original soundtrack and professionally scripted voice-overs.