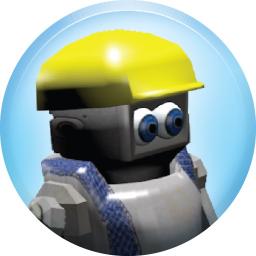 ★★★★✩
"... for puzzle playing platform gamers who want a new and exciting play to meet their thirst for a challenge" -MacGames.org

If you get stuck on a level, check youtube.com/hdchimpstudios for a walkthrough!

It was just another ordinary day for a lowly constructo-bot named LQ. Until on his commute home along the galactic space lanes a passing dump truck spewed tons of space debris into LQ's lane causing him to take aggressive maneuvers. With his ship slightly banged up and the aging ship battery almost drained from the abnormal workload, LQ has no choice but to perform an emergency landing on a nearby rocky world. With a crash and a bang, his ship smacks down on the desert floor approximately 155 million attoparsecs away ( about 5km for us Earthlings) from his intended target, an old refueling station. With the sun starting to set, he starts making his way to the station and that is when your Light Quest truly begins!

You must help LQ guide a reenergizing laser beam back to his spaceship through 15 hand crafted levels containing numerous puzzles and challenges. You will have the use of mirrors and beam splitters to manipulate the laser as well as control panels, elevators, and big red buttons to influence your environment. Explore this expansive world and unlock its mysteries to help LQ get back to his ship and more importantly get back to his robo wife and robo puppy whom are anxiously awaiting him back home.

Light Quest features 5 original music compositions by Harry Mack, the composer who worked on award winning titles such as Braid and Defense of the Oasis. His subtle blend of sci-fi and Native American flutes will set the pace as you enjoy 10+ hours of gameplay.