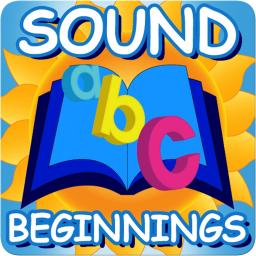 * Six learning games provide practice in phonics and reading
* Identify the beginning, middle, or ending sound of a word
* Two modes of matching: Letters to Pictures or Pictures to Letters
*Learn the sounds of the letters and how to use them

Six learning games offer practice using the sounds and not the names of the letters, and lowercase instead of uppercase letters at the beginning, middle, and end of words.

SOUND BEGINNINGS includes six interactive games, where players match the correct letter/sound to the first, middle, or last sound of the word identifying a pictured object. The first three games, in order of increasing challenge, ask the child to select the correct letter/sound for the beginning, end, and middle of a word. For example, finding the first sound of a word, the following lowercase letters appear at the top of the screen, which is in landscape orientation: r, q, y, s, and j. By touching any letter, the user can hear aloud the sound that letter makes. Beneath the letters is a photo of a rug and an empty letter box next to it. Touching the picture allows the player to hear the name of the object out loud. Players can touch the picture and each of the letters as many times as they like before dragging a letter down to the empty box. If they have chosen incorrectly, the game lets them try again without any break in the flow of gameplay.

This matching Letters to Pictures mode continues through the app's first three games. Using the example above, in the first game players must select "r" as the beginning sound. In the second game, players would select the "g" as the ending sound. And in the third game, players would choose the "u" as the middle sound. Users, parents, and educators can vary the difficulty of each game by specifying three, four, or five-letter words. Additionally, rounds can be set for 5, 10, 15, 20, or 25 matches each.

The last three games are identical to the first, except now players match Pictures to Letters. For example, four photos are in a row across the top of the screen, including a: kangaroo, fish, ball, and plate. A large, lowercase letter "k" is below with an empty picture box next to it. In this example, players would select the kangaroo as the photo matching the first sound of the word. In the last two games, players must drag photos to match the end sound and the middle sound respectively.

Created by a team of educators and experts in early childhood development and education, and tested with preschool children to ensure maximum fun and learning potential, SOUND BEGINNINGS features the outstanding user interface found in all Preschool University apps. The educational games offer entertainment and incentive, and employ the most effective teaching methods. All audio recordings, both phonic sounds and complete words/sentences, feature a group of enthusiastic, young kids. In this way, students learn to recognize sounds, while ignoring the individual vocal characteristics of different speakers.