Read our top 5 predictions for mobile in 2019 to stay ahead of the tech and trends.

Mobile is an increasingly irreplaceable part of consumers’ lives and corporate growth.  2018 marked 10 years of both the iOS App Store and Google Play — ushering in a new era defined by mobile. As we embark on the next 10 years of the app stores, we are on the cusp of new advancements in the app economy. To navigate this environment, we’ve compiled five key mobile trends you need to know for 2019. 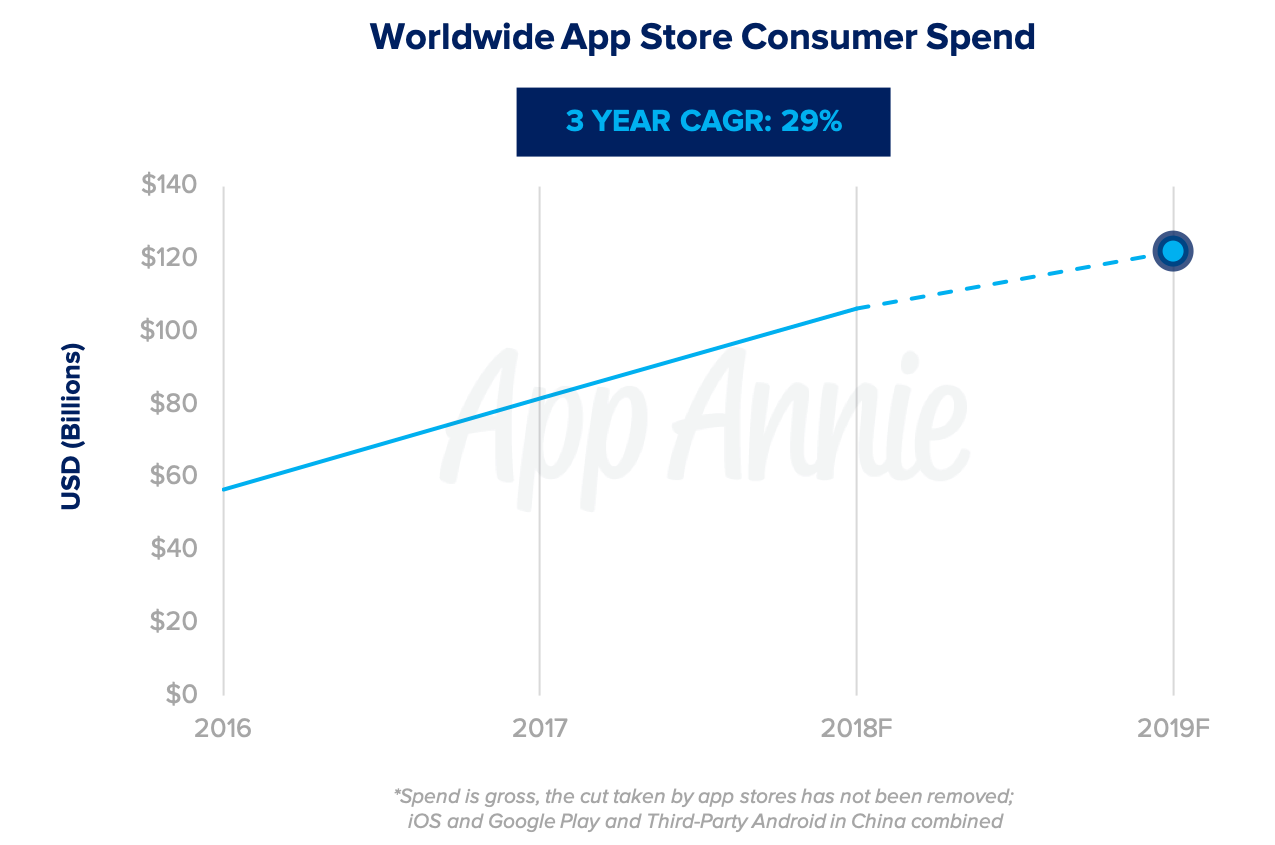 In 2019, worldwide app store consumer spend will grow 5x as fast as the overall global economy. Mobile will continue to take over consumers’ mindshare and fuel corporate priorities. This represents only a fraction of total growth in the mobile economy — mobile spend is also poised to grow for both in-app advertising and commerce (e.g. Uber, Starbucks, Amazon), which transact outside the app stores. Games will fuel the bulk of consumer spend growth in the app stores, as mobile gaming will continue to be the fastest growing form of gaming. China will remain the largest contributor to consumer spend growth in the app stores; however, we expect to see a slight deceleration in 2019 due to the game licensing freeze in China. Consumer spend on in-app subscriptions will largely fuel the 2x growth rate for apps outside of games versus games, albeit games will represent nearly 75% of total consumer spend. Growth in the device install base will be driven by Android devices in emerging markets. Not only will the install base grow, but time spent in apps per device is poised for growth in emerging markets such as Indonesia where the average user will spend over 4 hours a day in apps.

2) Mobile Gaming Will Grow to 60% Market Share, Driven by Expansion in Casual and Hardcore Ends of the Spectrum 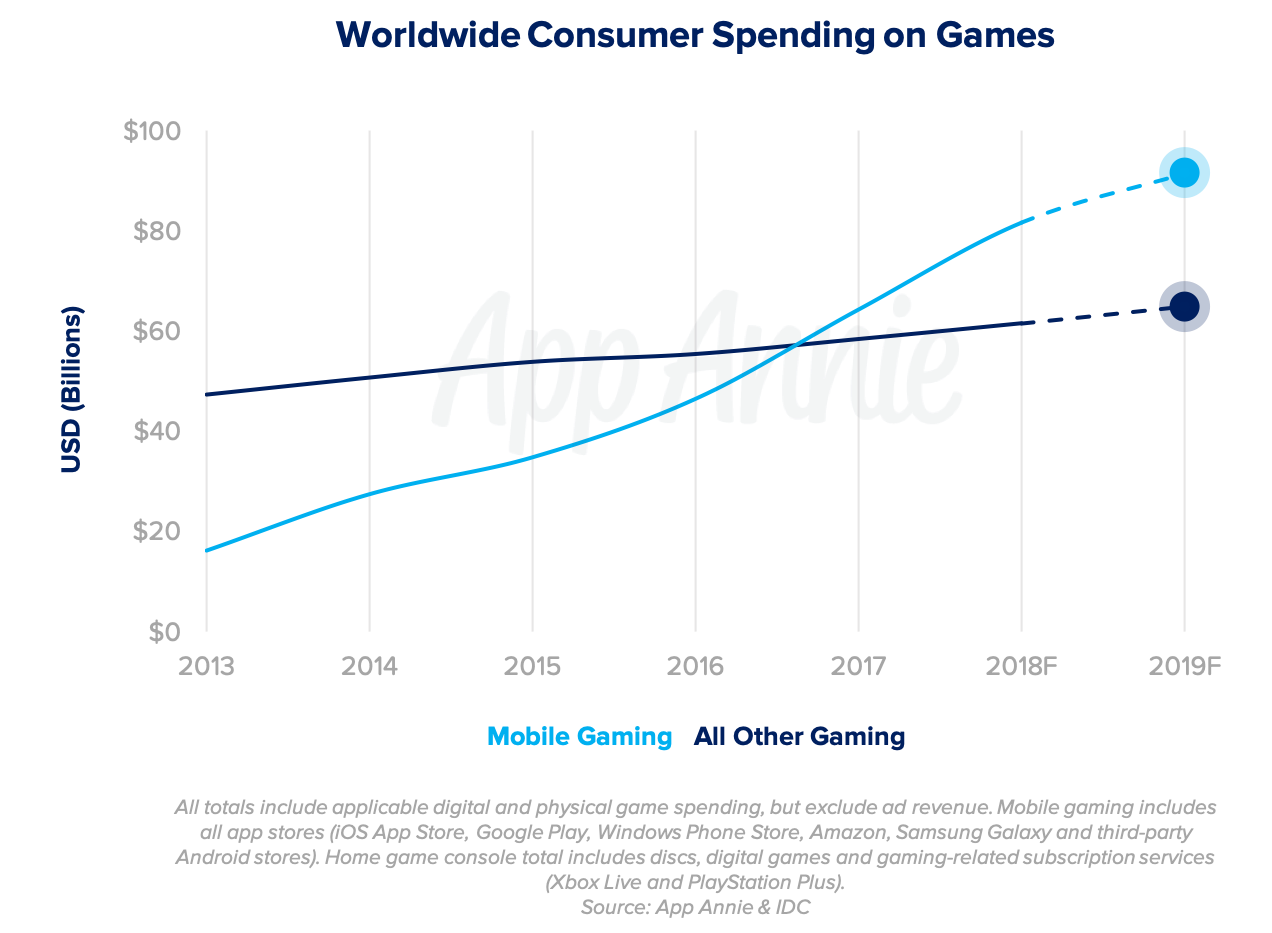 In 2018, we saw the mobile gaming experience mature. Fortnite and PUBG — along with upgraded smartphone specs — drove multiplayer game mechanics that put them on par with real-time strategy and shooter games on PC/Mac and Consoles in a way that hadn’t been done before, all while complementing existing mobile gaming habits. An offshoot of this advancement in mobile tech was the emergence of cross-platform gaming. As a result, games in 2019 will be less siloed to platforms and more connected. For many publishers, mobile has the scale — and growth — that makes this a particularly compelling strategy. On the opposite side of the spectrum, we expect hyper-casual games with simple gameplay to drive growth in downloads and adoption in 2019, capturing a large portion of the market who may not traditionally identify as ‘gamers’. Because these games yield relatively lower revenue per active user, developers need compensate in scale by releasing lightweight games with mass appeal and stickiness. Together, it is these two ends of the spectrum — casual and hardcore games — that will fuel growth in mobile gaming in 2019.

Consumer spend in mobile gaming will reach 60% market share among all gaming platforms: PC/Mac, console, handheld and mobile. Should the game licensing freeze in China continue into 2019, Chinese firms will push harder for international expansion and mergers and acquisitions could become more common. Advancements in mobile multiplayer game mechanics, and cross-platform gameplay as a by-product, will also lead to experimentation in streaming and esports, the latter of which is likely to amplify the popularity of former. While 5G, along with improved battery life, stands to help with advancements in mobile gaming, it is still too early for a material impact in 2019. 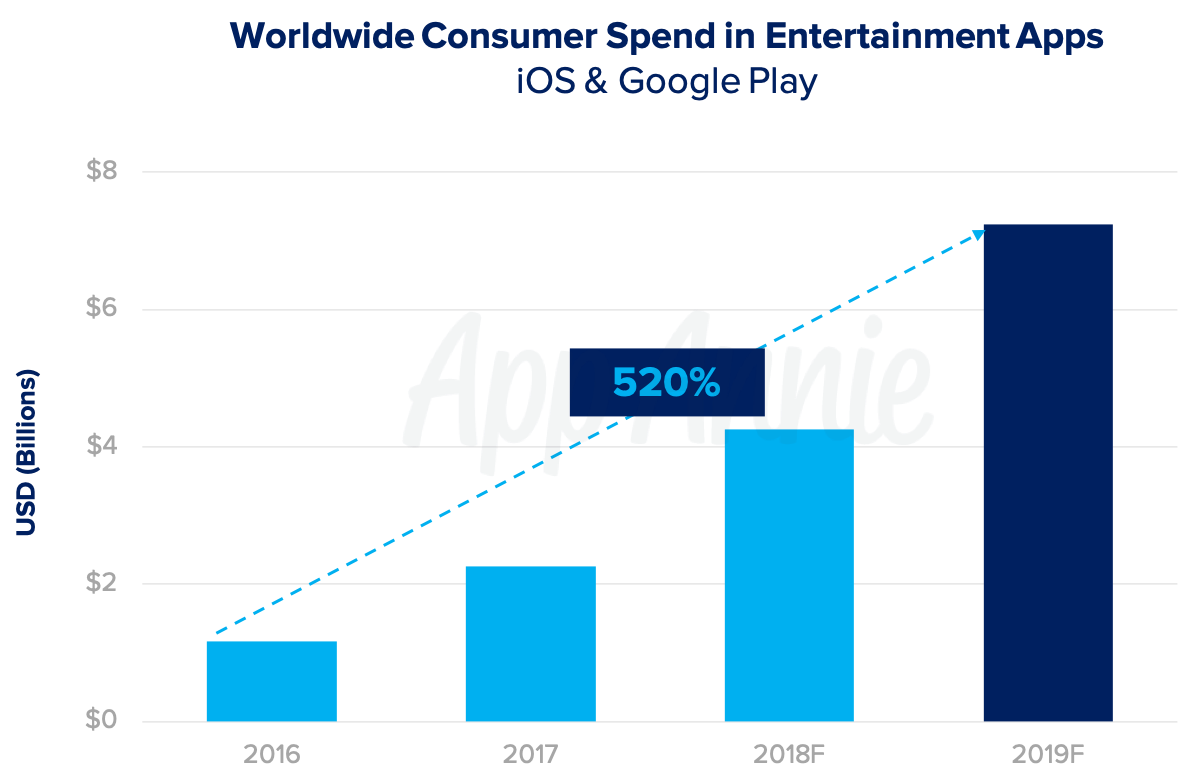 The average individual consumes media — whether reading, listening, watching or posting — for over 7.5 hours each day. In 2019, 10 minutes of every hour spent consuming media across TV and internet will come from individuals streaming video on mobile. Total time spent in video streaming apps per device will grow by 110% from 2016 to 2019. Global consumer spend in Entertainment apps will grow 520%, fueled largely from in-app subscriptions in video streaming apps. Short form video apps will continue to drive much of time spent streaming — YouTube alone accounts for 4 of every 5 minutes spent in the top 10 video streaming apps in the US. In addition, growth will be fueled in part by the rise of social video apps like Tik Tok and the prominence of short-form video in social media apps like Instagram and Snapchat.

Disney is set to disrupt the market in 2019 with the introduction of its streaming service, Disney+ giving Disney four top streaming apps in the space: Disney+, Hulu, ESPN+ — embedded within the ESPN app — and ABC. However, it’s a crowded space with players wanting to own their own content, a similar pattern to cable TV. As a result, on the consumer side we could see a resurgence in piracy, as accessing content requires multiple decentralized subscriptions. With increased competition, we expect consolidation in the space through partnerships and content bundling or acquisitions over time. We’ve already seen studios partner directly with streaming services — Paramount with Netflix and A24 with Apple — and expect more of this to continue in 2019. 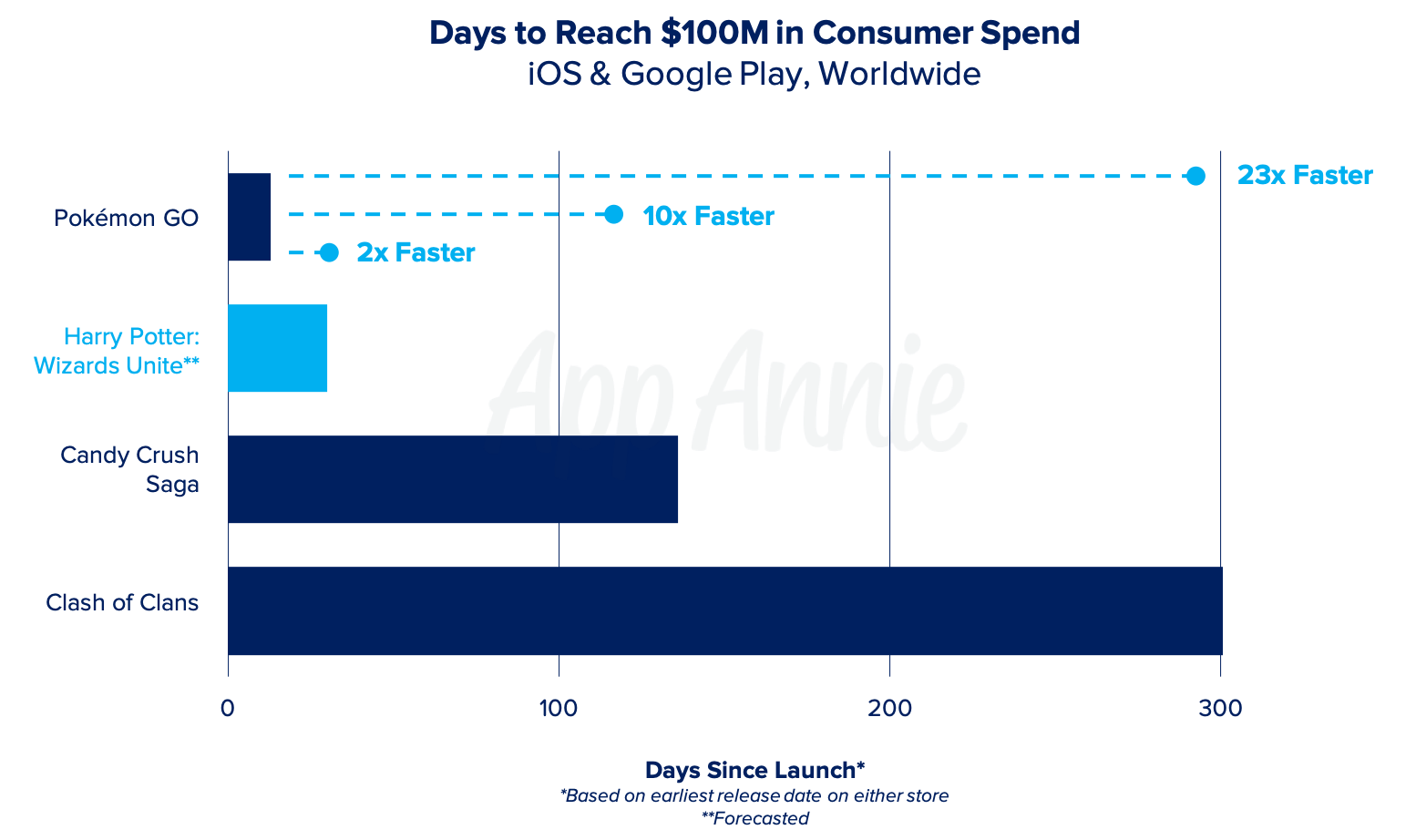 Much of the conversation surrounding Niantic’s Harry Potter: Wizards Unite centered around the newly released trailer, 2019 launch date and comparisons to Niantic’s Pokémon GO — the game that popularized location-based AR gameplay in 2016. We expect Harry Potter: Wizards Unite to be a top-charting game by downloads, usage and consumer spend. However, the question remains if the Wizards Unite launch will outperform Pokémon GO. While the Pokémon franchise is worth roughly double the Harry Potter franchise in its entirety, Harry Potter — beginning as a book series versus a game — has a fervent fan following and could attract a new segment of casual, sticky gamers. Not to mention, should Harry Potter leverage strategic partnerships early on — similar to meetups and sponsored locations in Pokémon GO — the game could see a lift in the early stages. Pokémon GO, however, was first-to-market for a mainstream location-based AR mobile gaming experience, captured nostalgia within its target market and currently maintains a stronghold of active users. While we found time spent in Pokémon GO was largely additive to total gaming time, it is less likely people will play two AR games. That being said, the games are targeting different segments and stand to grow the overall active user base for Niantic’s portfolio. Pokémon GO shattered mobile gaming records, clearing $100 million in its first two weeks and becoming the fastest game to reach $1 billion in consumer spend. While we don’t expect it to surpass Pokémon GO’s launch, Harry Potter: Wizards Unite is set to clear $100 million in its first 30 days — which is no small feat.

5) 60% More Apps Will Monetize Through In-App Advertising in 2019, Vying for a Piece of the $250B Digital Advertising Market 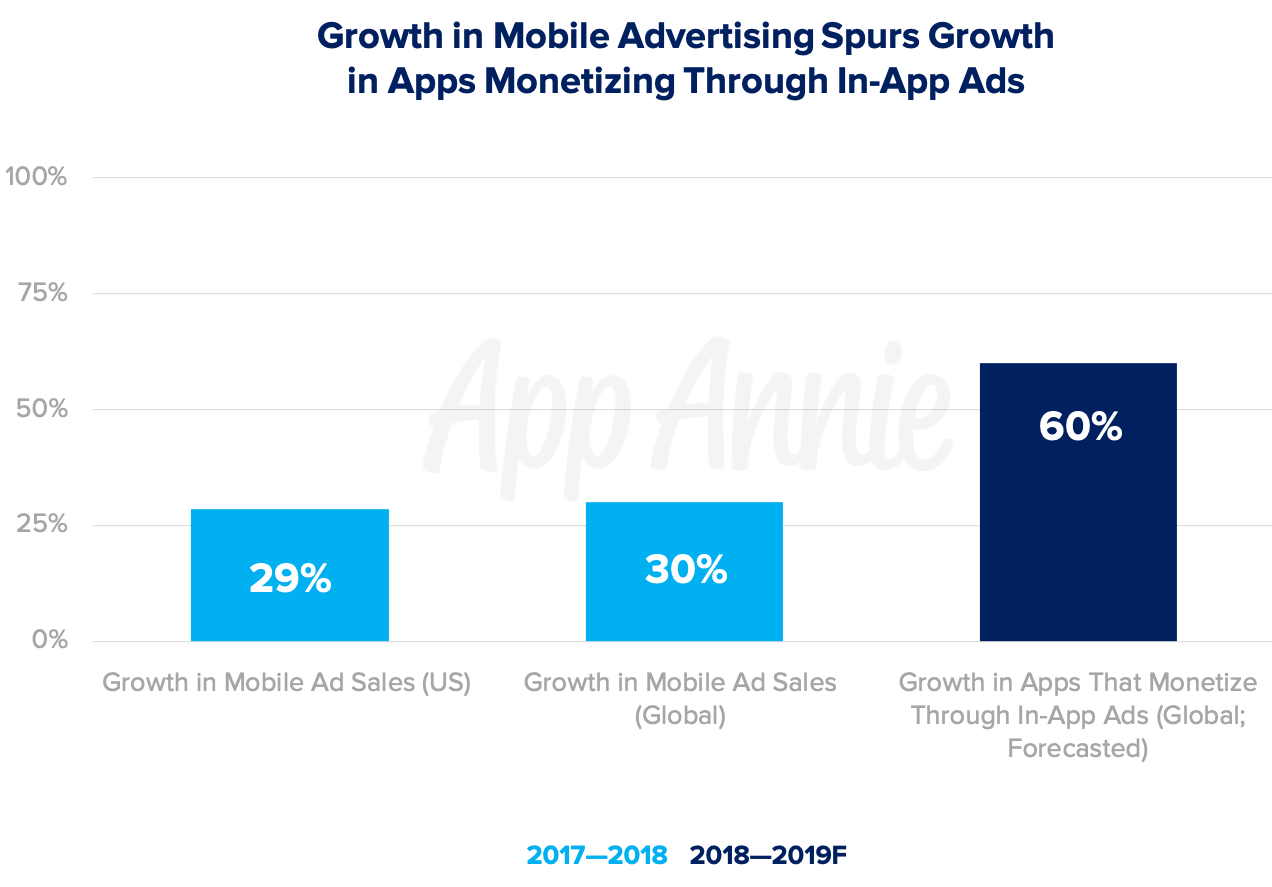 Mobile has taken over share of advertising spend and is the predominant growth factor behind digital ad spend. In 2018, mobile will account for 62% of global digital ad spend, representing $155 billion, up from 50% in 2017. In the US, mobile surpassed TV ad spend. We expect mobile to account for an increasing share of digital ad spend in 2019. Mobile app publishers are taking note of the changing advertising landscape. In 2019, 60% more apps will monetize through in-app ads. This will increase competition among advertisers. We’ve already seen indications of maturation in advertising strategies for apps leveraging in-app ads as part of their User Acquisition (UA). In 2018, the top downloaded iOS apps in the US advertised across 35% more ad platforms and leveraged 170% more ad creatives than in 2017 — meaning app marketers were employing more robust targeting and testing strategies. The same is true of top games. In 2018, we saw top downloaded iOS games in the US use 10% more ad platforms and 20% more creatives. With more consumers than ever before using mobile, and more time being spent on these devices, it is expected for advertising dollars to follow. Mobile is the first screen, and it is here to stay.

2019 is set to be a blockbuster year for mobile. For a deeper dive on our key mobile predictions and the trends you need to know, read our State of Mobile 2019 Report: